When you’re young, it’s often the simple things that bring the most joy and pleasant memories.

When Aunt Mary K. and Uncle Joe got married, they lived on the farm where Mom and her four sisters grew up. After Uncle Joe passed away, Aunt Mary remained for many years before moving to the street behind Aunt Ann’s. David and I often spent the night, since Mary Ellen (Deedee) and Corky were close in age.

Mom once told me, “Years ago, we created a little pool by damming up a portion of the stream behind the house and barn. Every few minutes, we climbed out of the water to check each other for blood suckers, and sprinkled salt to loosen the more stubborn leeches.”

I repeated the story to Deedee. We found a spot we assumed was our mothers’ swimming hole. Aunt Mary and Mom must have been really hot to swim with blood suckers. 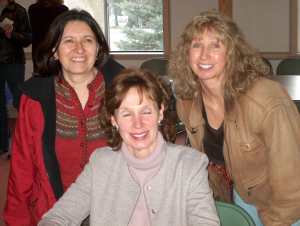 Deedee’s naturally-curly blonde hair fell to her shoulders and framed her large brown eyes. A genuinely nice, and pretty person, Deedee usually smiled while speaking. Corky (Joseph) got his nickname because everyone claimed he was such a corkscrew, very active and getting into mischief.

On a hot summer day, the four of us walked along the stream bank to where it meandered into a small wooded area behind the Karpinski’s house. Corky showed us a magical place he discovered earlier.

A sharp curve in the stream created a narrow ten-foot gravelly band of beach front. Schools of tiny minnows hugged the shoreline, basking in random splotches of sun that shone through the overhang of leaves. Corky and David cooled off in a natural two-foot high pool. I remembered Mom’s blood sucker story, and stuck to wading. I checked between my toes every few minutes, and urged Deedee to do the same.

Corky taught us a new song that began—‘Way down south where the bananas grow, a flea stepped on an elephant’s toe’. We sang it a hundred times, with various intonations, while wading and walking back to the house.

Like many haylofts, a portion of Aunt Mary’s held long forgotten stored items. Deedee and I explored its corners and discovered a treasure. A pile of Look and Life magazines from almost two decades ago fascinated us with their old-time fashions. We brought a selection for Aunt Mary to marvel at, but she had been there and done that, and didn’t want musty magazines on her kitchen table.

Aunt Mary was close to celebrity status; she went to school with Uncle Jim Fisk, who hosted the Freddy Freihofer Show. He selected children from the audience to draw squiggles. He then created a picture from the mess on the paper. I fully expected to take over Uncle Jim’s job when I got older. To prepare, I had the neighbor kids draw numerous squiggles which I artfully turned into drawings. The kids weren’t as appreciative as they should’ve been, and after several afternoons tired of helping me get ready for my future.

Aunt Mary K’s refrigerator held a fruit drawer actually full of fruit. Our’s at home occassionaly held apples and once in a great while, oranges. Gary complained as the selection became less vast. I practiced stealth with future fruit removal, but he knew it was me. The plums were my favorite.

Lesson Learned: Enjoy the beauty and uniqueness of every day. And stock your fruit drawer with a large variety of fruit.

Now it’s your turn: Did you ever wade in a brook?