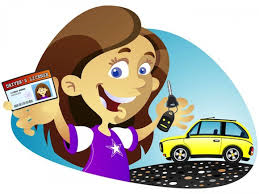 http://www.rekhadhyani.com
Freedom is just around the corner!

They decided to teach me how to drive and quickly discovered there was nothing standard about me.

A learner’s permit was the first step toward my passport to freedom. Controlling a giant hunk of metal was nerve-racking, not so much for me as for my regretful instructors.

I intently stared at our Pontiac hood ornament, making sure it lined up with the edge of the road.

“You need to look down the road so you know what’s ahead of you,” said Mom in a deceptively calm voice laced with a panicky edge.

I flicked my eyes between the ornament and the road ahead, gradually figuring out how to stay centered in my lane while watching where I was going. Driving was a cinch. In another day I’d have it mastered.

I was fairly comfortable with an automatic, when Momma-nooch became the first in a long line of optimists who made the mistake of putting me behind the wheel of a standard.

After many false starts in our driveway, Mom compounded her mistake by taking me on the road. Once I got going, driving a standard wasn’t too difficult. Of course, I was on a back road with no stop signs or traffic lights.

And then I entered the Queensbury town limits.

I approached a well-traveled four-way intersection.

Hoping to direct me away from any congestion, Mom said, “Make a right turn up here.”

The traffic light was green. I put on my blinker and obediently turned the wheel to the right.

“Slow down!” she shouted.

I took the turn on two wheels in the far lane, successfully demonstrating that a clutch does not work well as a brake. Luckily, no one was in my way.

http://www.ctorchia.wordpress.com
Sorry Daddy-O, this is never going to be me!

A few days later for reasons unknown, Daddy-O joined in with attempting the impossible, but he took it a giant step further.

My silly father decided to teach me how to drive a tractor. Maybe he thought I’d come in handy during haying season.

I headed straight for his gas pump — a somewhat foreseeable event. Luckily, Dad stood behind me on the tail-hitch and grabbed the steering wheel in the nick of time.

Fast forward twelve years later: My new boyfriend and future husband gently assured me, “Sweetie, you just need the right person to teach you how to drive a standard.”

I joltingly drove his Volkswagen around my trailer three times before he yelled in an aggravated and unromantic voice, “Stop! Stop the car now! Honey, you’re never going to drive a standard. I should have listened to your father.”

Lesson learned: He was right on all counts. I never learned, and he should have listened to my father. I stuck to automatics.

Now it’s your turn: How did your first driving lessons go?

By skinnyuz2b in Road Warrior on September 22, 2014.
← A Reluctant Twin Parking Perfection →