Susan definitely had a temper problem that seemed to manifest itself whenever David and I were home alone with her. There may be a correlation here, but it’s purely circumstantial evidence.

After getting home from school and dishing out ice cream, we watched television. I liked The Mickey Mouse Club because I followed the serial adventures of Annette. David and I each became hooked on Dark Shadows, a soap opera with what might have been the first television vampire.

Too bad for her, majority ruled. David and I were the majority … every single day.

“I should get a turn once in a while,” she complained.

David and I raised our hands. Two against one. We won again! 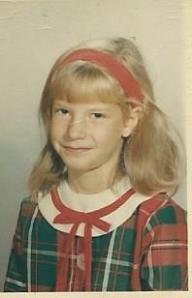 Susan got testy, walked to the television, and switched to cartoons on our only other clear channel. I got up and turned the channel back.

After repeating this a few times, she gave us no choice (so the following actions were all her fault). Time for anger management.

A deep sump hole sat to the left of our television console. David grabbed one of Sue’s feet and I grabbed the other. We dangled her over the sump hole, laughing so hard we almost lost our grip. Her long hair fell down, brushing the top layer of cobwebs.

Susan screamed a bit, but always ended up agreeing to leave the television alone.

Our little sister did not appear to like living in a democracy.

Now it’s your turn: How did you manage anger problems?