Me, a couple years later, modeling a dress I made (1968). Notice the modely pose.

Waiting in a school corridor for your parents to pick you up after school should be quite simple, if not downright boring. The key words are ‘should be’.

I sat on the corridor window’s ledge, watching for my father’s car. Mom usually picked me up when I stayed past the late bus, but this week Dad got the chore. Several other kids stood waiting for their rides along with me.

His car pulled up and I hopped in. The following day, same time and same place, Larry and Len approached me. Their expressions were a mixed bag of curiosity and reappraisal.

“C’mon, tell the truth,” Larry demanded. “We saw him pick you up after school yesterday.”

A brief moment of confusion passed over me before the truth of the matter hit my brain. Crap! They thought my father was my boyfriend. Time to burst the bubble.

“You guys are nuts. That was my father!” 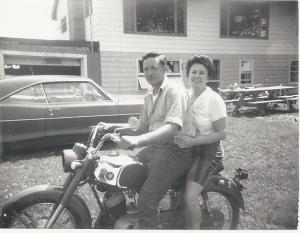 Len squinted through skeptical eyes. “Then your father must be really young.”

“No, he just looks young. Everyone thinks Dad is a lot younger than he really is.”

Dad’s car swung into the circular drive. Larry and Len walked out the door with me and casually walked past Dad’s driver’s side, checking him out.

“Who are your admirers?” asked Dad.

“They aren’t my admirers, they’re yours,” I grumbled.

I explained the misunderstanding. Dad perked up with a sparkle in his eyes and couldn’t wait to repeat my story to Mom.

After Dad’s gleeful repetition, he got Mom’s famous “Go stoomp”. We never knew the English interpretation, but her meaning was clear.

Mom returned home after picking Susan (13) and Paula up from school. Paula ran past me and into her bedroom, crying.

“What’s wrong with Paula,” I asked.

“I have no idea,” said Mom. “She began crying as soon as she got in the car and won’t tell me why.”

I followed Mom into Paula’s room where she lay sobbing on her bed. When questioned, she became hysterical and refused to talk. After much prodding she finally choked out the cause of her distress.

“What on earth makes you think you’re having a baby?” I asked, none too gently.

“While I was waiting for Mom to pick us up, Jason (a boy in her grade) touched me in my private place.”

Now, we both almost passed out.

“Tell us exactly what happened,” Mom and I demanded in unison.

“We were both standing by the window in the corridor,” she sniffled. “For no reason at all he said ‘Hey’ and poked my chest with his finger.”

Mom and I exhaled as relief flooded us.

“Wait a minute,” I said, “Did you have your winter jacket on?”

We relayed the news that no baby was in the works, but Jason was wrong to poke her, even though the poke was through her winter padding. Mom informed Paula’s teacher, who included a discussion about good touch/bad touch the following day.

Lesson learned: As usual, boys were the source of annoying bumps in the road, whether in high school or grade school.

Now it’s your turn: Did you have a misunderstanding with the opposite sex?