While growing up, many lessons were presented to me on how to impress boys. I managed to ignore them all.

When I was eleven years old another example of boy/girl enlightenment occurred. As usual, it went right over my head and failed to lodge in my brain.

Flashback to 1961 and one of my unlearned lessons: David and I walked to Margaret Murphy schoolyard near Bochi’s and swung back and forth on the monkey bars. I couldn’t believe my good luck when three neighborhood boys, around my age, joined us. Woo hoo! We hung out and talked before migrating to the jungle gym.

One of the boys hung from the top bar and did chin-ups. The cutest boy followed and outdid the first boy. To get their attention and admiration, I went next.

The boys chuckled as I began raising and lowering myself. “This oughta be good,” said the first boy.

“She’s gonna drop down before she does five,” said the cute one.

My arms shook like limp noodles, but I managed to outdo them both.

“Who cares what a stupid skinny girl does,” said the unimpressed cutie. “If I weighed ten pounds like her, I could do a hundred chin-ups.” He turned toward me. “Get off of our playground before we beat you and your brother up.”

No lesson learned by moi. Just confusion over their negative reaction to my superior skills.

Now here’s the fact of life that I really didn’t like: History repeats itself and so did I.

Back to the present, known as 1966: After practicing in the cafeteria our JV cheering squad crossed the gym toward the girl’s locker room. Cheerleaders were chosen by a panel of teachers, not students; which explains why I was part of the group.

Stragglers from the boys basketball practice milled around, probably waiting for us. One of them lowered a row of rings from the gym ceiling.

Our two groups mingled as the guys took turns traveling back and forth on the line of rings to see who could complete the most rounds. I was great at the rings. I waited impatiently for the last boy to drop off.

I casually jumped up and began my impressive exhibition. I kept my legs together to accentuate how gracefully, as well as easily, I could swing. After many trips back and forth I traveled down the rings to complete the round that beat the highest boy.

Instead of cheering, he left. I went down and back an additional round, hoping he would return. Surprisingly, he did not.

Slightly deflated, I perked up seeing that plenty of cute guys remained, talking to the other cheerleaders. At the end of the rings I swung extra high, let go, and landed with a flourish in front of them.

I raised my arms like an Olympian. “Ta da!” 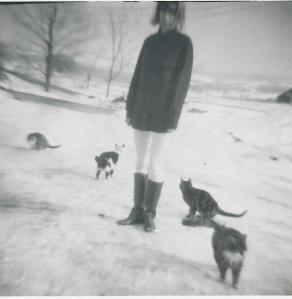 1965 –
Destined to only have cats as companions.

I did not get hoisted on their shoulders. No one said, “Wow, I didn’t know you were so athletic! Want to go out with me?” Not even a hearty pat on the back.

After a moment of dead silence (not the awed silence I deserved) I finally received some comments.

“What are you, part monkey?”

I stood still for a few minutes, grasping that their tone of comments was not going to improve.

I raised my chin and truthfully declared, “I could have done more if I wanted to.”

I left them to chew on that, although I doubt they did, and marched stiffly to the girl’s locker room. I muttered one of Grandpa’s sayings, when things didn’t go according to plan, “Oh, poo-pappy.” And I threw in one of Mom’s “Go stoomps”, too.

Mom picked me up from school after she got out of work. I fumed while telling her about the contrary reaction my athletic prowess produced. Imagine my surprise upon being told boys don’t like to be outdone by girls. This went against my sense of competition.

“You mean I should pretend I’m not better at some things just because they’re boys?”

“No,” answered Mom. “That’s not what I’m saying. But you don’t have to show off either.”

Well, this wasn’t going to work out. Showing off was part of my nature. My interaction with boys was destined for failure. If I couldn’t show off and I didn’t possess a heaving chest, how was I supposed to attract a boyfriend?

Maybe I should find a pen-pal boy, so he wouldn’t care how undeveloped I was and I wouldn’t be tempted to out-do him at physical contests. But remembering my first kiss and really wanting to try it again, I preferred a flesh and blood beau.

Lesson learned: I learned that boy’s don’t always like to be outdone, especially in physical contests. However, I continued to ignore my newfound knowledge.

Now it’s your turn: Did you ever show-off for the opposite sex?