Off With His Head

http://www.tvtropes.org
You can use David’s head!

David and I put our heads together to have fun. Normally two heads are better than one, but he ended up losing his. Oh well, accidents happen.

We were packed into the basement of our house until the upstairs got built, creating lots of places to hide.

My cousin Barbara Kay (two months younger than me, Mary Barbara) lived a somewhat sheltered life, meaning she wasn’t allowed to act like a wild banshee like I tended to do.

David and I convinced Barbie to play hide-and-seek while she spent the night, with the lights off. Not an easy task since the dark and anything remotely scary terrified her (me too, but that doesn’t count). We compromised, agreeing to keep the hall light on and limit the hiding to our bedroom. 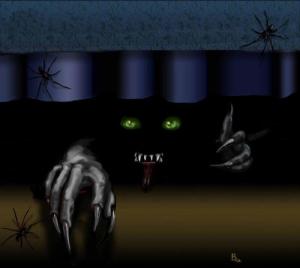 Barbie and I hid first. She stunk at hiding. Though in plain sight, David walked past her and searched until he found me. He made a big production of trying to find Barbie.

I didn’t need night vision to see Barbie squatting by the end of my bed nearest the hallway. I smelled a rat that smelled a lot like my game-rigging brother.

He continued searching and ignored Barbie’s muffled giggle when he stood near her.

Barbie jumped up. “I was right here the whole time.”

I was it next and figured two could play at this game.

I entered our bedroom and spied Barbie crouching in the exact same place. I brushed lightly against her.

“What the heck?” asked Mary the over-actor. “Someone must have knocked my pillows onto the floor.”

Barbie ended my fun by laughing too loud to ignore. I told David I gave up, because I didn’t feel like looking for him.

Now Barbie was it. “I don’t want to play anymore,” she said nervously. “Let’s do something else.”

“You have to take a turn finding us,” I explained. “It’s only fair. We promise we’ll hide in easy places.”

She foolishly believed me, but wisely insisted on a flashlight.

http://www.fotosearch.com
Hey, David, are you in there?

David crouched on top of his bureau, while I buried him in the mess of clothes he piled there. Barbie slowly came into our room. She shined the flashlight at my bed. Neither of us used her hiding place.

A brief sound of movement came from her right. Barbie spun around and cast her beam at the clump of clothes.

“Is someone on top of the bureau?” she asked.

She moved closer, reached out, and tentatively touched the pile. David and his coat of many pieces rolled onto the floor, landing at her feet. He lay perfectly still, covered in clothing with only his head sticking out.

“I knocked David’s head off!” Barbie screamed, while running for my parents.

Mom and Dad rushed in with Barbie behind them. Instead of a headless body they found David and me limp from laughing so hard.

Barbie made us sleep with our desk light on and refused to play hide-and-seek in the dark with us again.

Lesson Learned: If you’re afraid of the dark yourself, it’s not nice to scare someone else. But it’s fun anyway.

Now it’s your turn: Did you like to play in the dark?