The saying ‘You could fall into a pile of poop and come out smelling like a rose’ was not apropos. Well, the first part applied, but the second part was definitely talking about someone else. 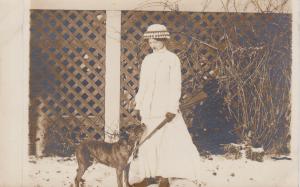 What could be better than one Mary Norton? Two Mary Nortons, of course! Great-Aunt Mary’s maiden name was Mary Norton. I was the new Mary Norton, named after my great-aunt, regular aunt, and Bochi. Aunt Mary and I were each above average height and wiry thin, but she had pretty gray pin-curls falling just below her ears while I had bushy hair and (thanks to Dad’s barber skills) crooked bangs.

Although it was neat that we shared the same birthday, I was grateful I didn’t share a name with Dad’s grandmother Pluma. Grandma’s name, Alma, was slightly better and I could have made it work.

I loved listening to Aunt Mary’s stories about the olden days. I’m talking about really olden days, back in the late 1800s and early 1900s. In addition to a name and skinniness, we shared a strong sense of humor.

“On April fool’s day, I used a very fine thread to sew Clifford’s silverware to the tablecloth,” she said, with a remembering chuckle. “Another time, I shot a huge black snake threatening a bird nest up in the white birch tree beside the garage. I coiled it up on the hosta-flanked walkway leading to the side entrance Clifford used. He was terrified of snakes (another chuckle). He screamed and jumped at least a foot in the air.”

“Oh, my nose was pressed against the kitchen window.”

Aunt Mary overheard me telling several neighborhood kids the story about a hatchet we found left on the breezeway stairs leading to her attic. Red paint smudged its blade.

“Tons of giant rats live up in the attic, and Aunt Mary uses this hatchet to kill them,” I explained in a somber voice. “The red on its blade is dried rat blood.”

Aunt Mary didn’t march out and correct my little fib, and later laughed while repeating my tall-tale to Mom and Dad. 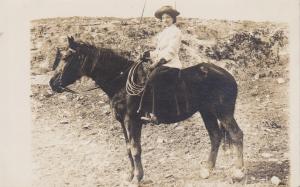 Where was this horse when she needed it?

She inspired me (and caused severe bruising to my ego and butt) with the following tale: “An old pony cart sat unused on my family’s farm and I wanted a couple of ponies to pull it. When no ponies were forthcoming, I used my ingenuity. I hooked up two heifers (young cows) and trained them to pull me around in the cart.” 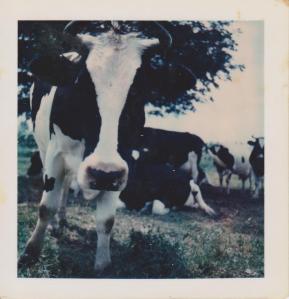 It was my idea, so I insisted on riding first. I perched on a wooden rail across one end of the indoor pen, while David offered a handful of fresh grass to lure a heifer close. I maneuvered the heifer sideways against the railing and jumped onto its back. The startled cow bucked like a wild bronco. Unlike a horse, a heifer has no reins or mane of hair to hang on to. I bounced up and down like an inept rodeo clown, inelegantly flew through the air, and returned to earth with a shploosh. For the first time (but not the last) my crash-landing was miraculously cushioned by a warm pile of manure.

Lesson Learned: Going first is not always best. Sometimes it’s better to go second, a lesson I should have remembered in the future.

Now it’s your turn: Have you had a bad poop experience?