Joining the ranks of pious nuns reentered my future plans, thanks to a visit with Annie. I could be as pious as the next person.

An unusual aspect of Aunt Ann’s house was the plastic runners leading from her front door to the kitchen and down the hallway toward the bathroom. I wish I’d known the trick of turning the runners over after everyone fell asleep. Of course, I might not get invited back, but there’s always a price to pay.

Under Aunt Ann’s kitchen window, grew a magnificent gladiola bed. I admired their variety of color combinations and considered them the most exotic flowers I’d ever seen. Mom was a master vegetable gardener, but not as proficient with flowers.

An alcove, less than two feet wide, nestled between the top of the stairs and Michelle’s bedroom door. Annie had a beautiful statue of Saint Theresa which gave me an idea. 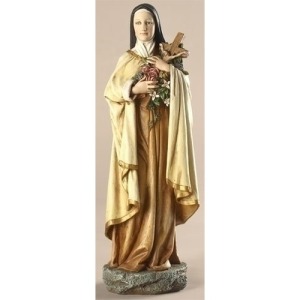 “Let’s make a shrine for Saint Theresa,” I suggested. “We can build it in the little niche.”

Annie said I was nuts, and left. Michelle, being a couple years younger, was receptive. A television-tray, covered with a colorful scarf, became our altar. We surrounded Saint Theresa with rosary beads and plastic flowers. A cross and palm fronds that moments earlier hung over Michelle’s headboard, added holy touches. I hoped Annie would be appreciate and make good use of her new chapel.

Michelle and I knelt on pillows and prayed, alternating between Our Father and Hail Mary. The fun factor diminished after a few rounds.

“Go get your mom, so she can see what we built,” I said to Michelle.

Aunt Ann came to view the new addition to her house. With an audience, praying became fun again. A month later, on my birthday, Aunt Ann gave me my own statue of Saint Theresa. Not as huge as Michelle’s version, but quite large none-the-less. Next to Saint Mary, Theresa was the prettiest saint. I later selected Theresa as my confirmation name.

In the afternoon, Annie and I played Barbie-dolls in her room. We arranged a single-floor mansion with her genuine Barbie furniture. I showed Annie my technique for creating furniture, using cardboard, Kleenex, bits of material, and lots of scotch tape. We spent the morning as craftsmen.

The next morning, we headed across the street to go roller-skating. The Pikes were the only residents on Hillview Avenue with a smooth cement sidewalk, or any sidewalk at all. We adjusted the length of our skates, tightened the shoe-holders onto our sneakers, and buckled the leather straps. Norris came running out to join us. Five years younger, his company was a small price to pay for excellent roller-skating.

When Mom and Dad drove me home, I suggested, “Why don’t we make a sidewalk in front of our house?”

“It’d keep David and me busy and out of trouble.”

All summer, I continued reminding him to think about it, to no avail.

Lesson learned: I wasn’t as pious as I thought; no nunhood for me. And I missed the mark by not becoming a famous furniture designer.

Now it’s your turn: Did you ever consider joining the religious ranks?