I didn’t want a commitment, just a little hand holding. And maybe some hero-worship (on their part, not mine). So why were my selected suitors so uncooperative?

Dad stopped at an intersection, waiting for the light to turn. A faded poster plastered around a telephone pole caught my attention.

“The circus is here. You’ve never taken us to a circus,” I said, making sure my parents understood I was a deprived child.

“There isn’t any circus,” said Dad. “That’s an old sign that’s been on the pole for ages.”

This is part of the clown act.

The following morning, I decided to join the circus and be a clown. I didn’t like clowns, but figured it was easy to run around doing tricks, and I knew lots of tricks. I’d quickly move up to glamorous trapeze artist and be the center of attention.

Not being a fool, I knew better than to run away alone. I needed an escort service. I gathered the neighborhood kids and revealed my plan.

“That sounds like fun,” said Mikey. “I could be an announcer.”

“And I could sell popcorn,” added David.

Hold the horses! I didn’t want to share the spotlight.

“There’s only room for one more person,” I said. “I’ll let you know as soon as any more spots open up, and I promise to put in a good word for you.”

For now, they could be part of my runaway parade. I dug out our box of old Halloween costumes and dress-up clothes, and we prepared for our exodus. I assumed the circus must be near the poster at the end of Dean Road, two miles away. Dean Road did not boast sidewalks. Luckily, it also didn’t have much traffic.

Six of us marched off in high spirits. Tooting music accompanied our single-file procession — David rolled a sheet of paper into a cone, creating a horn. Right, left, right, left. Our parade was small, but professional.

Shortly into our trek, we heard barking. The Kill’s spotted fire-truck dog, Sparky, and our black lab, Wolfy, had followed our trail. Kathy and I elected David and Connie to bring them back.

“Okay, but you have to promise to walk slow so we can catch up with you,” said David.

Kathy, Mikey, Deedee, and I agreed.

A half-mile from home, voices called down from the heavens.

“Hey, where are you guys going?”

“Why are you all dressed up for Halloween?”

I raised my eyes and beheld three older boys in a tree-house. One of them, Tommy, rode my school bus. He was a couple years older, had curly sandy hair, and I decided to make him mine.

I ask you, what boy could resist this?

“Let’s wait here for David and Connie,” I suggested.

I crossed over a stone wall and began scaling boards nailed to the tree trunk.

“Hey, look how fast I’m climbing up your rickety ladder,” I yelled. ‘Wait until you see how high I can climb your tree.” Yes, it was a pine tree, but I wasn’t wearing a dress, so there’d be no repeat performance of exposed pine-pitchy undies. 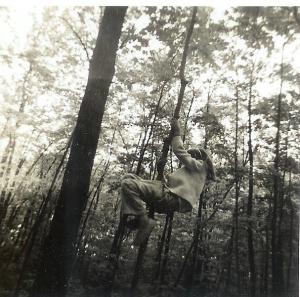 Demonstrating how high I can climb a sapling before it bends.

“Go away, no little kids allowed,” said one of the voices.

“I’m not little,” I replied. “You guys are only two grades higher than me.”

“Yeah? Well that makes you little,” echoed another voice. “You’re little and skinny.”

Their trap-door slammed down, blocking my grand entrance. I pounded and pushed up, but someone’s heavy butt weighed it down. The boys leaned over their platform, zinging brown pine-needles and pinecones at me.

Not the reception I planned on getting.

If I backed down, then I’d be admitting my undesirability. So, I valiantly persevered.

It was during my battle of the sexes that Mrs. Kill pulled up in her station wagon, followed closely by Mrs. LaCross. David and Connie squealed when interrogated about the lack of neighborhood children. Mom couldn’t leave baby Susan home alone, so Mrs. Kill came to collect me, along with Kathy.

“Mary Barbara Norton, come down out of that tree and get in this car,” said Mrs. Kill.

“Yeah, get out of here. Go home, you skinny baby,” shouted Tommy.

I was in a pickle. I had to prove I wasn’t a skinny baby.

Not a wise reply.

“If you don’t get your skinny butt down here immediately, I’ll climb up and drag you down,” she yelled back.

I looked her over. Could someone that old actually climb up and get me? I didn’t want to find out. Reluctantly, I backed down the makeshift ladder and approached her car, where she stood by the passenger door like an unpleasant chauffeur. I leaned over to get in, and she swatted my butt.

Embarrassed, I tried to save face. Turning to Mrs. Kill, I repeated, “You can’t do that. You’re not my mother.”

She gently grabbed my arm, swung me around, and swatted my butt again. Mrs. Kill then assisted me into the backseat. The car door shut, muffling the treetop laughter. The runaway parade was ferried home.

Mrs. Kill dropped me off and waited while I trudged across our front lawn and up our cement-block steps. Then she went and called Mom the second she got inside her own house.

My butt got another whack and I was sent to my room, where it seemed like I spent half my life. I pressed my ear to the closed bedroom door and heard Mom quietly talking and chuckling on the phone with Mrs. Kill.

Indignantly, I opened my door, yelled, “Someday when I’m famous you’ll all be sorry!” and quickly shut it before I got another whack.

I never did join a circus, though many people said I should.

No one bothered informing me it’s easier to catch bees with honey. If I’d obtained that nugget of wisdom, I’d have preceded my climb up to boy-land with gushy compliments. Instead, I continued demonstrating my superior skills to gain attention.

Lessons learned: A boy on the ground is worth three in a tree. And neighborhood Moms who aren’t your mother, don’t like being reminded of the fact.

Now it’s your turn: What’s the worse thing a member of the opposite sex ever threw at you?