When a tent is filled with compressed gas, will it float away like a hot air balloon?

Our family joined the Newcombs and their two daughters for a combo hiking and camping trip. Carol was a few years older (considered by me to practically be an adult) and Sandy a couple years younger (barely out of babyhood, therefore should never question me). Carol taught Sandy and me how to jitterbug. She also showed us how to dial random phone numbers and ask silly questions (before the days of caller ID).

David and me. This is my ugly bubble-butt bathing suit.

With four children and tons of camping gear, our parents sensibly decided to hike five miles from the nearest public road, to Terrell Pond. And yes, it was raining.

A forest ranger with a conservation jeep (the only one allowed to drive on the trail) took pity on us. After ferrying the Newcombs, he returned for us. There wasn’t room for everyone to sit inside, so Dad and Mom stood outside on the running boards, hanging on for dear life. I laughed and made faces at them through the window.

Our first night, we feasted on a full-course baked ham meal that Mom and Janice made ahead of time. The second night, we planned on barbequed chicken. We had the chicken, but no grill. Dad and Doug found the skeleton of an old box spring mattress, and placed it over our campfire. The world’s largest grill—with plenty of rust–was invented. 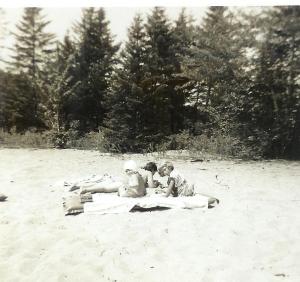 Carol, Sandy, and me.

Sandy and me, the bathing beauties.

The next question is what was a mattress doing in the middle of nowhere? Our location was so off the beaten trail that in case of an emergency, we had to spread a sheet on our tiny beach so the forest ranger manning a fire tower could see it.

Doug poured cups of pond water over my head, and occasionally on Carol’s, but no one remembers exactly why. We assume it was connected to misbehaving, probably teasing Sandy or David. I do recall getting mad each time he did it.

Flashback: Doug brought out my temper earlier that summer, when Dad, Doug, Sandy, David, and I stood by his pasture looking at a horse.

“Hey, Mary, have you ever seen stars in the daytime?” he asked.

A little voice told me to decline his offer, but my mouth already said, “Sure.”

Doug picked a piece of timothy-grass. “Hold this sideways, gently between your teeth so it slides back and forth. Now close your eyes and you’ll see stars.”

I shut my eyes and Doug pulled the stalk through my teeth, leaving me with a mouthful of seeds. Darn that Doug.

He also forgot to turn off the electric fence before asking me to hold the bottom strand up, so Sandy could skootch underneath. He claimed it was an accident, while laughing and wiping tears (not of contrition) from his eyes.

Back to the present: On our return hike to the cars, there was no forest ranger in sight. There was no rain, either, just the blazing hot sun on a stifling afternoon.

Dad and Doug wrapped our two tents over the tent poles, forming a sling, and loaded it with camping gear. They set off while Mom and Janice rounded up us kids. They gave each of us a sleeping bag to carry, along with a smaller item, like a lantern or jug.

Being a pack-mule in the hot sun rapidly lost its charm. “It would’ve been nice if you and Janice had planned ahead and brought a wagon to pull us in,” I gently chastised.

“Oh dear, Genevieve,” said Janice. “I can’t believe we forgot the wagons. Maybe you should give her a piggy-back ride.”

“What a good idea,” replied Mom. “Here, Mary, I’ll bend over and you can climb up between all the camping supplies on my back. What’s fifty more pounds?”

I correctly deduced this was an insincere offer.

Halfway through our trek we began finding gear that the guys unloaded and dumped for us to pick up. Mom and Janice were not happy campers by the time we reached our cars, especially when their husbands asked “What took you so long?” 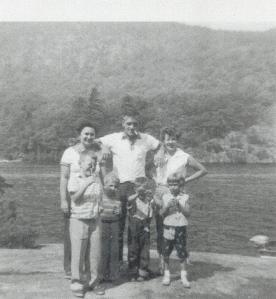 The very next week, on the spur of the moment, Dad and Mom decided to go for another long weekend of camping with the Shermans and their two sons. David and I couldn’t believe we were going on a vacation again. This time we went to Log Bay Island without the hike.

I was excited to be camping with Phillip, a year older than me. Gary, a couple years younger, could play with David. Unfortunately, Phillip preferred to play with David, too. 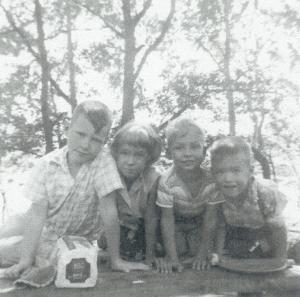 Phillip, me squeezed in tightly against him, David, Gary

Once again, a sumptuous first night meal was provided. Mom made Great Aunt Mary’s famous baked beans. She wrapped the crock in layers of newspaper to keep it warm. We kids slept in one tent and the adults slept in the other.

It didn’t take long before our parents turned their sleeping bags around so their heads hung out in the fresh air.

Lesson learned: Do not eat lots of baked beans if you are sleeping in a confined area with other people.