Kids, and certain adults, have a knack for turning the most innocent object into a hazardous peril.

For example, a carrot morphing into a maiming cudgel (David was guilty of this transaction), or a simple crayon jammed into a little nose (my nine year younger sister Susan tried this). My specialty was turning our pedal tractor into a precursor of the 1983 possessed-car movie, Christine.

The edge of my grandparent’s side yard contained a small, but steep hill going down into a field. My brother sat on the tractor, holding his feet away from the pedals. I stood on the back with one foot and pushed off with the other. After coasting to a stop, we dragged the thing back up the hill, and rode over and again.

We hurried for one last record-breaking run. With David astride the tractor at the top of the steepest part of the hill, I backed up, ran as fast as I could, and jumped onto the back. I knocked David forward, causing him to sharply turn the wheel, and making the tractor roll end over end. He wasn’t hurt too badly, but cried because the situation called for it. I howled because the axel rubbed my ankle raw. I still have a scar. I’d show you, but it doesn’t photograph well. 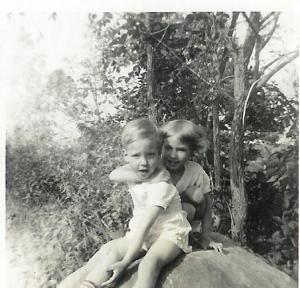 The danger from our pedal tractor wasn’t over. We brought it to Bochi’s house. She didn’t have grassy hills; she had a sidewalk–a true luxury to rural kids. Thick slabs of sidewalk slate met, buckling together like colliding plate tectonics, with patches of two or three smooth joints. Much superior to bumpy grass-covered ground.

We were allowed to ride as far as the corner, one house away. As usual, David pedaled, and I pushed from behind to speed us up. Three older boys, aged seven or eight, were kitty-corner to us. We attracted their attention, and one shouted over a derogatory remark about our tractor.

From the safety of our corner, I yelled a retort that Dad taught us, “Your mother wears combat boots.”

David and I laughed.

“You won’t think you’re so funny when we come over there!”

“You pooped in your pants, and it stinks,” I shot back.

They jay-walked over to our corner.

I high-tailed it to the safety of Bochi’s front porch and looked back to see where David was. He didn’t pedal fast enough.

The boys surrounded the tractor, shoving and hitting David. I screamed at them to stop and screamed for Mom inside. She came running out, the boys ran off, and David cried while slowly pedaling the rest of the way back with Mom at his side. I was scolded for leaving him behind.

Lesson learned: On the one hand, I was a traitor and the worst sister in the world. On the other hand, he who hesitates is lost.

Now it’s your turn: Do you have a pedal tractor or pedal car memory?